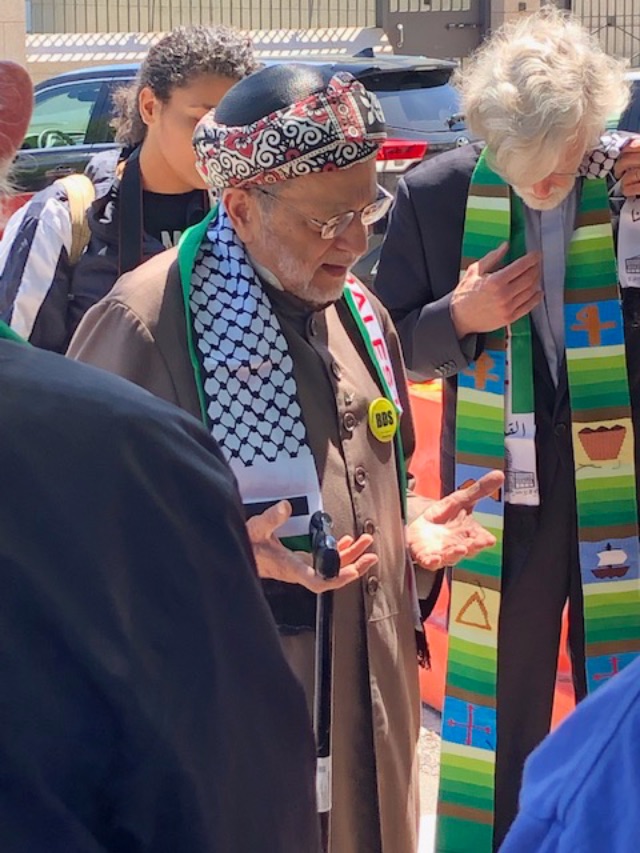 Washington - May 15, 2019 — On the 71st commemoration of the Nakba, the Catastrophe of Palestinian exile and ethnic cleansing, activists from around the greater Washington metro area gathered outside the Embassy of Israel. The multi-faith delegation of lay people and clergy was there to present the Kairos Palestine—Global Kairos for Justice international petition, and a call to freedom and human rights.The Israeli embassy refused to take the delivery.

The petition to the government of Israel was signed by by over 3200 individuals and organizations from 51 countries. Today’s delivery was linked to other similar global events which simultaneously commemorated the Nakba in speeches, actions at government buildings, embassies and consulates, as well as conferences and marches. 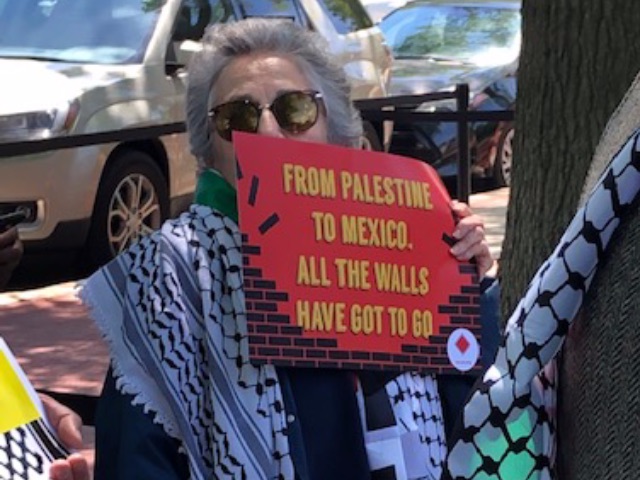 The Washington delegation of human rights defenders were gathered with Palestinian flags, posters and signs, wearing Palestinian keffiyehs, and Palestinian clergy stoles. Many of those gathered were Palestinian Americans whose families were exiled at the creation of Israel in 1948 or in the years since. Others were from faith-based organizations including advocacy networks from many church denominations as well as members of FOSNA, (Friends of Sabeel North America), JVP (Jewish Voice for Peace), and other solidarity groups from wider justice struggles.

The group was met by embassy staff who, upon learning of the petition, shut and locked the gates to the compound, refusing to speak with the delegation or receive the petition. Instead, they called the Secret Service who responded by asking for the details of the action. The petition-delivery group stayed clear of the gates, remaining on public space on the sidewalk at the corner outside the Israeli embassy.

The Rev. Graylan Hagler called the group to silence, inviting all to become spiritually grounded in prayer, in witness, and in the continuing pursuit of freedom from oppression and occupation for Palestinians everywhere. He first invited Imam Ali Siddiqui from the local Muslim community to pray, followed by other prayers by a diverse group of Christian pastors as well as an Orthodox Jewish justice activist. 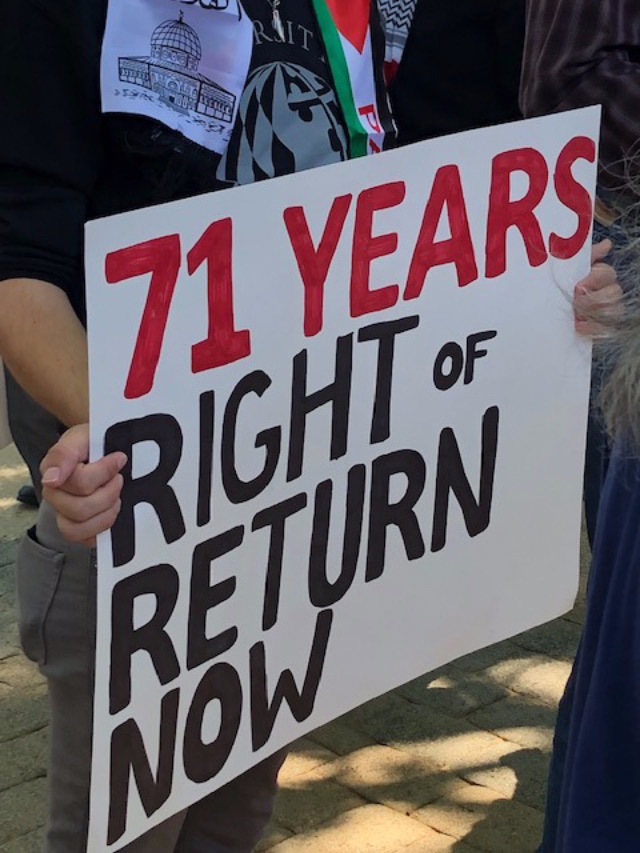 Praying needs singing to bring those words to action, so the petition pilgrims were led by Rev. Hagler in “Oh, Freedom,” the post-Civil War African-American freedom song often associated with the American Civil Rights Movement. Today’s group changed some of the lyrics to lift up the longing and determination of the Palestinian people to break the chains that enslave them to occupation and exile.

The group proceeded two by two to the gates of the Embassy of Israel where the petition was read aloud into the space of the Israeli diplomatic presence in our national capital. Rev. Hagler preached to those gathered at the gate, urging all to work for justice for all Palestinians, remembering our own government’s complicity in human rights violations by the state of Israel, as well as the complicity of the leaders of both nations.

Our struggle will continue until dignity, equality and freedom for Palestine is realized. 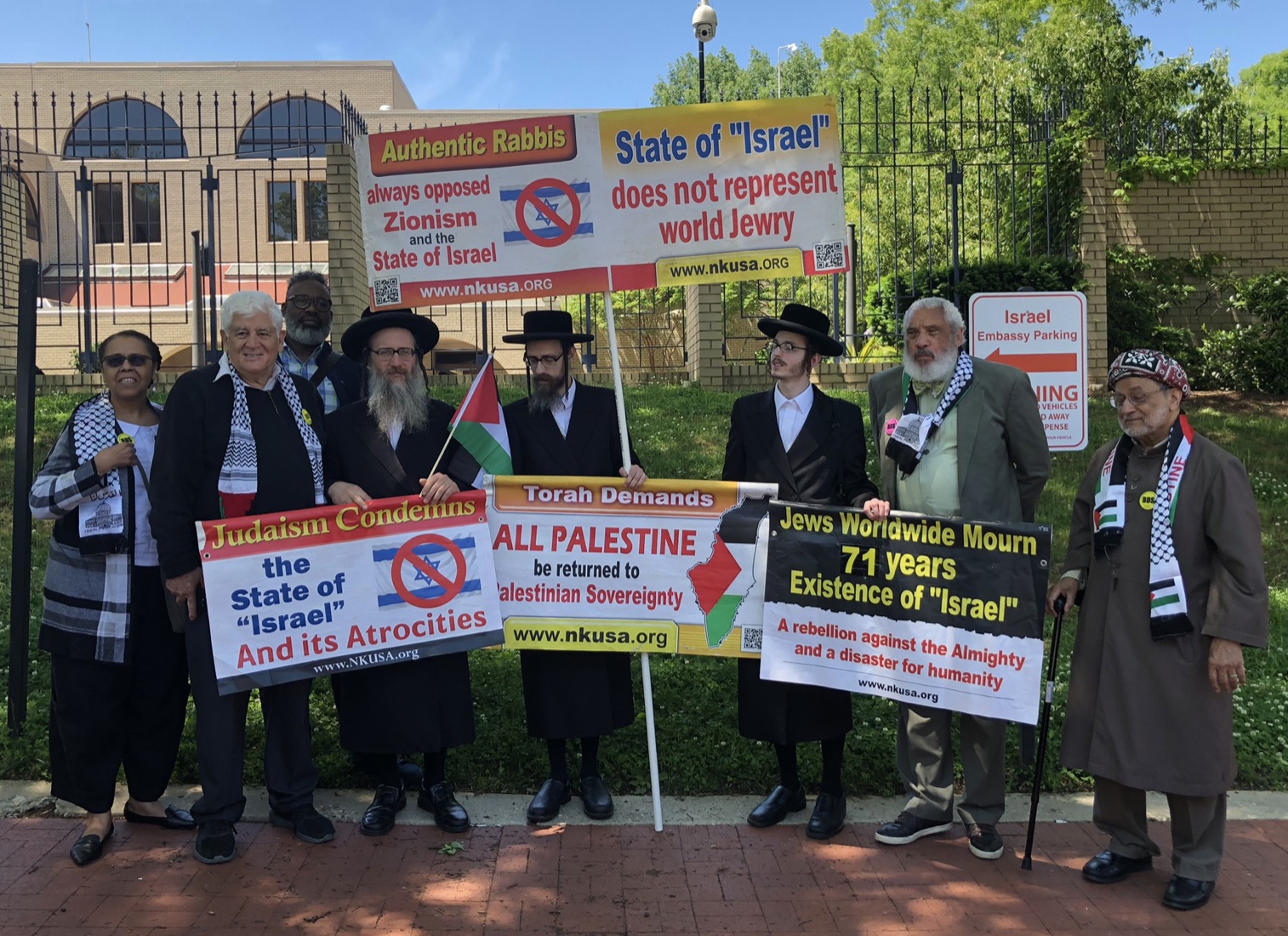 Some of the multi-faith Washington delegation
who attempted to deliver the Global Kairos for Justice Petition to the Israeli Embassy.